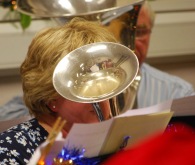 Many Cornish villages have traditions which the community maintain with a sense of pride and belonging. Stithians has several to do with Christmas, one being a Carol service in the village hall involving three of the village musical institutions – the brass band, the men’s choir and the ladies’ choir. The hall is not huge and the atmosphere is warm and cosy by the time  the audience is shoe-horned in.

The carols of Thomas Merritt feature strongly, together with performances from the band and both choirs. But one Carol features every year because the composer was born in the village. Lewis H  Pascoe wrote a version of “While Shepherds Watched Their Flocks By Night” probably between 1905 and 1910. He was the organist of Stithians Penmennor Methodist Church from 1903 to 1944 and the first accompanist of St. Stythians Male Choir 1913-26.

Occasions such as this are vital to the continuity of the Cornish choral tradition. Long may it continue!

A MERRY CORNISH CHRISTMAS TO ALL OUR READERS 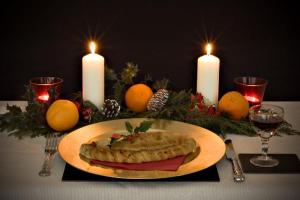